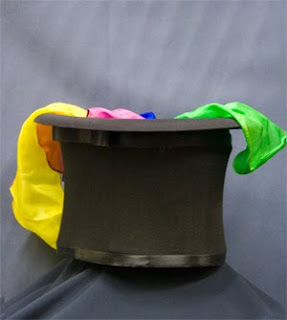 Just off the top of Carroll Baker's head...When someone hears the word “Magic” or “Magician”, what is the first thing that they think of? In a non-official survey, 7 out of 10 always thought of the old “Rabbit in the hat trick” and the other 3 thought of a magician in a top hat and tuxedo.

Do you have a top hat? Is it sitting on the shelf collecting lint and dust bunnies? Have you thought of getting a top hat but not sure what to buy.

There are lots of styles still on the market and this blog will try to tell you about your choices.

One of the best Top Hats to consider is the “Collapsible Top Hat”. The Hats come in many colors and look great on any stage. They look elegant and can be used as a production item. The Hats fold flat and are easy to carry. You could even have several of them in a small briefcase that you show on both sides and then pop them into the open position as you produce them and then leave them stacked in a display much bigger than the case they came from.

One of my favorite Folding Top Hats is the Dragon Top Hat. Super cool in both design and looks and will dress up your act nicely and it even has a hidden trapdoor in the bottom.

If you are looking for a place to dump your cards and silks from your manipulation act, the Solid Top Hat with a MAK Eureka table base is the way to go. It screws to the base and is made from a high impact Black Plastic and when not holding up the Top Hat, the base can be used for other tables or props.

The last Top Hat that I’m going to tell you about is a Production item, a Top Hat and the perfect finale to your Card manipulation act. The “Card Fan to Top Hat” folds up like a card fan with very bright card patterns on it and when tossed into the air it changes into the Top Hat on the way down. Beautiful designs and workmanship make this a winner.

I hope this helps in making the decision into which Hat to get but just a little secret between us, you should buy one of each and make a themed act out of MAGIC Top Hats!
Posted by MAK Magic, Inc. at 6:53 AM