Is anybody out there?

Okay, we have been blogging for a little over a month now and we would like to know if you, the readers, are getting anything out of the things we put up each week.

Here is your chance to let us know. Email me, Glenn, at glenn@makmagic.com and tell me your thoughts! What would you like to see us talk about on the blog. So far we have had product reviews, and a couple of ideas to change up the use of some standard props. What more should we do? Who knows, your idea may be our next blog post!

Thanks for checking in,

You got balls? How about cups?

Buskers, con men and magicians throughout history have displayed their awe-inspiring “the hand is quicker than the eye” skills with a time honored yet baffling rendition of the Cups and Balls. This seemingly simple effect of passing small objects through a solid cup and making them jump from one cup to the next has mesmerized audiences probably since the time of the Pharaohs. There may even be a painting of a magician doing cups and balls on the walls of a tomb. The picture may be next to one of the same guy been killed for fooling the Pharaoh. Heck the painting might even be on the wall of the magician’s own tomb.

Cups have been created in a wide variety of sizes, shapes and materials to accommodate an equally as varied style of ball and the all-important final load. If you bump into a magician in the grocery store, chances are better than not that he is probably looking for final loads! Fruits and vegetables are the most popular final loads. Although Johnny Ace Palmer produces baby chicks; Don Allan used baseballs and Paul Gertner produced a solid steel ball as final load. Anything that will fit inside the cup can be used as a final load.

Years ago, Aldo Colombini performed a routine in which he would flip a cup from one hand to the other while it contained the knit ball! That was an amazing feat! Countless different flourishes can be added to a simple routine to step it excitement.

Every magician, whether working close-up, corporate hospitality suites, or street fairs should have a cups and balls routine. They should study Di Vernon’s classic routine and learn from a master of the art. Even a simply performed basic routine that comes with the small plastic set, with enough humor and or mystery added to the routine can make it intriguing even to the toughest crowd. Well-known street performers, real street performers, the likes of Kozmo and Gazzo, and close-up performers like Michael Ammar and Ricky Jay have a cups and balls routine as a staple in their shows.

So, if it’s good enough for the pros…

Check out our full line of cups, combos and chopped cups!
Posted by MAK Magic, Inc. at 12:24 PM

Better use of Props, Kid Show 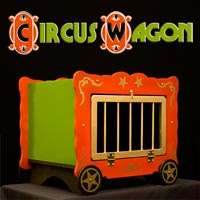 Have you run out of ideas for your shows but own a ton of props that you are not sure what to do with?

Try combining the effects to make new routines... Instead of a separate vanish and production, how about a transposition or metamorphosis instead?

For example, have you thought about using a Rabbit Wringer and a Circus Wagon together? Using these two effects together will allow you to use more of the stage, making your act look bigger in the eyes of the audience. Using other parts of the stage instead of just the center could help you sell to bigger venues.

Blow up the balloon as you walk across stage to the Circus Wagon. Using a marker, draw a quick shape on the balloon to look like a rabbit (just the head and ears will work). Place the balloon into the Circus wagon. As you activate the Wagon, the Balloon pops and out comes the rabbit for a great finish.

Try this for your next show and see if you don’t get a bigger reaction from your audience.

The Instant Production Box, from Fronter an immediate classic!

Murray Sawchuck is still on “America’s Got Talent” and did you catch Dan Sperry’s performance this week? Plus, we are now in to the second week of Criss Angel’s 6th season of “Mind Freak” his show on A&E. Criss is getting mixed reviews but hey it’s magic on TV and that gets people talking about magic…right? Email at Steve@makmagic.com and let me know what you think.

I want to tell you about an item that we have here at MAK Magic that will become an immediate collectors item. The Instant Production Box, Cherry - Frontier (P9896).

Here are just some of the finer points:

• This beautiful Hand crafted prop is made from cherry wood and stained to a deep rich color.

• It contains 4 windows cut from solid glass and the gimmick is made from real glass mirror. None of that flimsy stuff here.

• A small turntable is built into the base permitting you to spin or rotate the box after your production.

• Check out the video on www.MAKMagic.com


The Instant Production Box (P9896) will look wonderful on a shelf in your magic room or center stage in your next performance!