Do you have a Strat-o-Sphere gathering dust? Are you tired of the traditional presentation? Do you want to add a new twist to it? Try one of these ideas and put the Strat back into your show.

If you do a school show, this is the perfect effect to use for a safety show theme. Traffic Safety is a very important lesson. Using the Stra-O-Sphere is a great way to get the message across and keep the kid’s attention.

Idea One: Start the effect by producing three silks, one of each color that matches the balls for the Strat-o-Sphere. You could produce the silks bare handed or as a continuous production all tied together with square knots from a Change Bag. Continue by placing the silks into a Mirror Box that is shown to be empty. Do the magic, pull out the balls for the Strat-o-Sphere, and continue from there.

Idea Two: Do the kids forget where the Red ball is or miss it changing places in the tube, try tying an 18-inch Red silk around the tube at the top to signify where the Red ball starts out and slide it to the bottom of the tube before raising the tube to show the ball has moved.

Idea Three: As an alternate way to vanish the ball at the end of the routine, try a “Devil’s” hanky instead of the Joker box. The “devil’s” hanky packs flat and makes for the perfect vanish. You can even show both sides of the hanky to prove the ball has vanished.

There you have it. Try these suggestions to step up you Strat. Keep checking out our Blog for more ideas and reviews.
Posted by MAK Magic, Inc. at 6:00 AM

We're bustin' out about BROKE 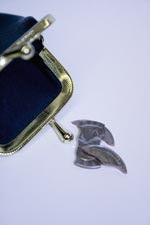 All right, the magic amigos at MAK MAGIC are at it again. This time we took aim at the coin guys and gals. BROKE is an entertaining and amazing coin effect that will break your audience up as you talk about meeting a guy who was down on his luck, a juggler… kidding here. Anyway, he is down to his last quarter, broke, the quarter, not the guy.

You produce a coin purse from which you dump out pieces of a broken quarter. After some a great story telling and some fun poking at the US Mint and the federal budget, you guessed it, you repair the broken coin. This is something you can carry anywhere, perform surrounded and end up, wait for it…CLEAN. Let me repeat that last bit. You end up CLEAN!

This is a great effect for table-hopper, strollers, close-up artists and coin folk. We give this one three red hats! Red hats…our logo… Come on work with me here.
Posted by MAK Magic, Inc. at 5:37 AM 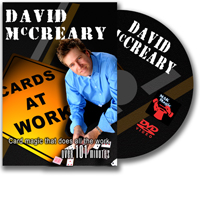 from the Magic staff at MAK


The staff at MAK sat down with Cards at Work and could not believe the amount of great card magic and entertainment presented here. There are literally, dozens of effects that are amazing and easy to do. Duh, they’re self-working card tricks! Okay, they may be self-working and that might seem lame to some of you, but they are never the less, baffling and will keep a group of spectators glued to your every move. TV personality, actor and magician, Dave McCeary has a presentation style that is easy going and a tad on the crazy side. You will find yourself laughing and learning at the same time as he performs TV Dice, Hands Off, Count Down and even a version of Scarne’s Drunken Poker Deal. This is a must have for anyone new to card tricks and even for those card pros who could use a couple of self-working effects to add to a well rounded card routine at the tables or strolling.

The magic staff at MAK all give this one three thumbs up. Three, there are three of us here hence three thumbs.
Posted by MAK Magic, Inc. at 11:04 AM

Frontier Magic gets the point!

from the desk of Steve Branham

July is turning out to be a great month for magic! The Society of American Magicians meet for their annual convention in Atlanta and the International Brotherhood of Magicians Convention took place in San Diego, California. There has been some talk about the upcoming “Essential Magic Conference”. Everyone is wondering, “Could this be the way of magic conventions in the future?” We will have to wait and see!

Speaking of talking, we have been talking a lot about Frontier Magic lately and for good reason. These folks have built some exceptional magic for us such as card boxes, Electric Sawing Thru Neck, the Benton and Foxes Nest of boxes and the Bunny Bucket as well as other classic magic.

Recently, the team has been working on a MAK Magic original bringing a new look and affordability to the old standard. I am speaking of the new Dagger Head Chest. If this looks familiar, it should. The Dagger Head Chest is an economic version of the classic Murder, Inc! This new incarnation is wood constructed. You still get metal daggers as with Murder, Inc. You still get the great effect of pushing fifteen 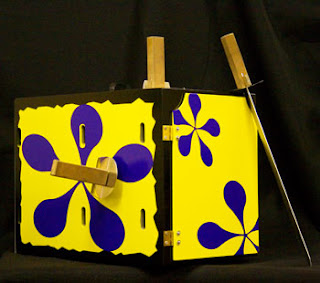 separate daggers in the box containing your helper’s head. You still make your helper’s head vanish, just at a more reasonable cost! Instead of a base, Frontier has added a detachable handle for support, making it easy to set up and pack. The new graphics give it a retro look that could be a call back to the old Mystery Machine on the Scooby Doo shows of the eighties, making it great for a kids show. This effect does not use BLACK ART!

This is a great entry-level illusion for anyone wanting to get into stage magic. Check it out! As with all Frontier Magic, it’s made in America.

A New Magic Frontier at MAK!

MAK has established a relationship with the father and son team of master wood workers from Frontier Magic to build “quality first” illusions and magic props. Former fine furniture builders, the designers and builders at Frontier have turned their talents to the art of building beautifully handcrafted magic.

We are starting to get in some very nice objects from Frontier Magic. Just last week we received the Card Box and Twin Prediction Card Box. Deeply stained maple boxes that have the appearance of jewelry boxes, these pieces may prove to be collector items. Only time will tell. The idea for the Twin Prediction came about during the discussions on the development of the Card Box as just a random thought and Frontier sent us a prototype that was more than we could have dreamed! The infinite possibilities of this amazing box are staggering!

Yesterday, samples came in for the Benton and Foxes Nest of boxes. Wow! The finish and artisanship on these boxes is unbelievable! The three boxes are finished to create a really an amazing display when stacked with the large box stained a dark walnut, the first inner box a lacquered blonde maple and the load box matches the large box. And, wait until you see the gimmick. Keep checking the blog for more on the B&F Nest of Boxes.
Posted by MAK Magic, Inc. at 5:43 AM