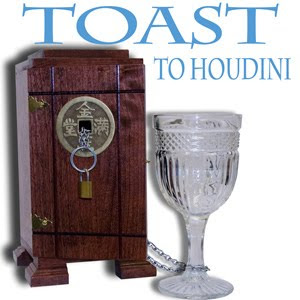 As most of you are aware, we have an exclusive relationship with illusion builder Frontier Magic. Well, these guys are stepping it up with a couple of really great illusions. The first is “Toast to Houdini”. A brilliantly thought out and beautifully made piece of magic with a story written to draw an audience into the mystery and hold them to the very end. The first run of this item SOLD OUT in two days! Check for back-order info. 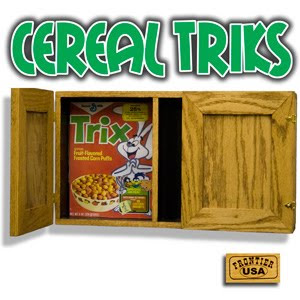 The next illusion is “Cereal Triks”. Talk about an idea whose time has come. “Cereal Triks” plays off the classic “Sucker Die Box”. However, here you get a prop that looks like a small kitchen cabinet, a box of cereal (gimmicked) and the unlimited potential for no-stop laughs. This effect is custom made for the magician doing schools shows, birthday parties or even the odd corporate gig. This stage prop works well for parlor too!

As of the first of January 2011, Frontier Magic has now begun to burn its brand into each of its illusions. This guarantees that you will always be getting a quality piece of magic that comes out of the heart of Amish Country and built in the USA.

Check out the full line of Frontier Magic.
Posted by MAK Magic, Inc. at 12:43 PM 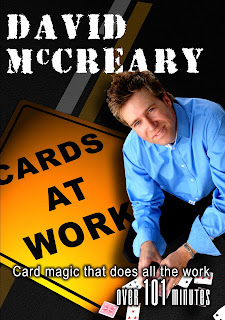 Seriously, this is one of the most impressive how to video we have in stock currently. The Cards at Work DVD is chock full of truly amazing “self-working” card magic. Hence, the name “Cards at Work”. This DVD is a must have for everyone and anyone who does card magic. Each effect is thoroughly explained by comedy entertainer, magician and TV personality, David McCreary.

Although this DVD would be invaluable for the person starting out in magic, it is no way is simply a DVD for beginners. Seasoned pros can pick up some very clever routines as well. A few of the better routines are Scattered, My Card Your Card, Hands Off and Scarne’s Drunken Poker Deal. And… There are tons more solid self-working card effects on this disk! The best part is, you can do all of the effects with a borrowed deck.

What more can I say?

Seriously, recommend this to a friend, I did!
Jake
Posted by MAK Magic, Inc. at 8:31 AM

2010 was a great year for magic…it was packed with some highlights and some low lights.

It started with James Clark & David Blaine using Magic to raise money for the victims of the Haiti Earthquake. 2010 was an interesting year for magicians and the legal system, Jonathan Pendragon was released from jail, Jim Pace went to Jail and David Copperfield’s accuser dropped her case against him.

The Essential Magic Conference was a success! Could this be the future in magic conventions?

Lance Burton retired from the Monte Carlo in Las Vegas And Doug Henning received a star on Canada’s Walk on Fame.

Magic on TV was huge in 2010…Michael Grasso and his long run on America’s Got Talent plus Ellen, Craig Ferguson and David Letterman all on “Magic Weeks.”

And he ended 2010 with a hot one…the magic cruise and all the magicians getting stranded on board.